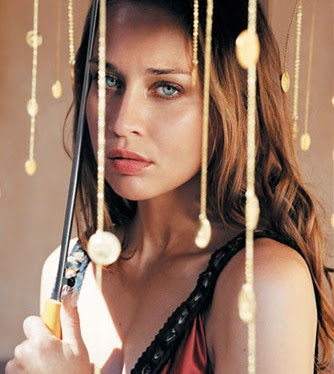 (The following was originally written for Amp Camp, a hipster-esque sub-division of neighborhoodies.com):

Sullen, pouty 19-year old piano prodigy Fiona Apple seemed to fall from the skies with her first album, "Tidal" a preternaturally assured collection of songs that slunk languidly between smoky jazz and Alanis Morissette alterna-angst. Assuring her success was a series of videos demonstrating her waifish sex appeal, particularly "Criminal", where she appears as a strung-out, underwear clad Alice lost in a tawdry lime-green carpeted wonderland of implied sexual misuse, drugs and wood paneling. Her erratic behavior at shows drew some flak from the press, eventually presaging a brief nervous breakdown, and we knew she was trouble when her sophomore album came out with such a long name that no one could say it all the way through. But youth, beauty and genius is a rough combination, and we have no choice but to forgive her. Extraordinary Machine was thought to be in limbo due to record executive nervousness, but when it finally came out it showed the brazen Apple had matured without losing a shred of her gorgeous sorrow. Her jazz-standard crooning sister Maude Maggart is pretty cool, too.

TIDAL
The first thing you hear is a voice that's so deep compared to your expectations of what a 19 year old ingénue should sound like that you think you put the record on the wrong speed. But it's a CD, and so the sound is so clear you can hear her every soft breath in between hitting these great deep notes that slowly evaporate at the end of stanzas (check out the 3:29 mark in "Slow Like Honey"). So yeah she's popular, she's the poster girl for the self-cutting crowd, but she's also as disciplined and regal as Nina Simone and twice as well recorded. If there is any flaw at all it's just that at 19 she doesn't have the sensory gravity, the "soul" that Nina or Sinatra could bring to a lyric. Her style is seductive for the sake of destruction, or as she puts it on one of the albums chart-topping hits, she's a girl who "can break a boy / Just because she can." She's that beautiful anorexic girl who lures you into her bed just long enough to break up your marriage, just long enough for you both to realize there is no "there" there outside of taboo-busting. It's her gift for expressing the bottomless melancholy of a 19 year-old beautiful loner grown way-too old before her time due to the evils of older men. She still finds an inner wealth of maternal comfort for whoever of her listeners are in need, filtered through the slow motion duck and jab of "Shadow Boxer" or bathed in the Joni Mitchell-style piano and whispered solace of "Never is a Promise."

EXTRAORDINARY MACHINE
The spookily talented Ms. Apple's third album came with a lot of strange mythologizing behind it. Was the label not releasing it, or was the demo just floating around the internet before it was finally mixed down to the artist's exacting specifications? Whether it was all just ingenious hype or something else, it hardly matters, as the album encompasses everything that was great about her first two works, and then expands from there, managing to be even more quietly assured than "Tidal," and more pumping and assertive than "When the Pawn…"
Posted by Erich Kuersten at 11:07 AM