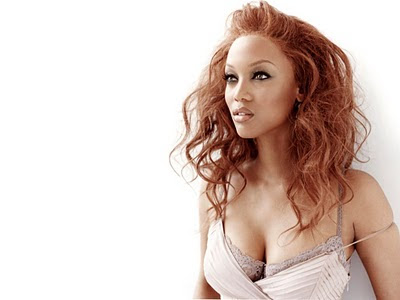 1. Tyra Banks - America's Next Top Model:
The modern Kali of reality TV, this host and creator of America's Next Top Model can be super nurturing one minute then cold as ice the next as she sends another chick off the show, but not before a good luck hug. Even if you're not a fashionista the show is amazing as it's so meta-textual. Think about it: a reality show about young girls who choke up when they get in  front of a camera for a photo shoot, but meanwhile they're on camera constantly for the actual show. Together with the judges you get to do modeling crits, judging the success of photographs - so you're watching a show about looking at photographs. The result is a weird hybrid of commercial-within-a-show (I know lots about Cover Girl designer lip gloss now) and meta-within-meta Russian doll boxing, and over it all Tyra stands like a beacon of always-on-point dynamic brilliance, demonstrating in every head tilt and enunciation exactly what she's trying to instill in this cross section of our female youths. 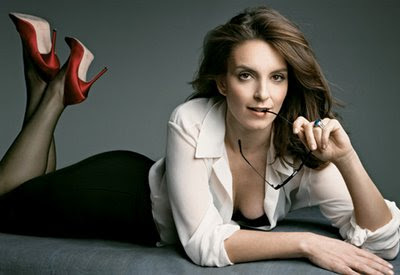 2.  Tina Fey - 30 Rock: Her repartee with Alec Baldwin on 30 Rock is one of the more inspiring things on TV, with the whole 'will they or won't they' element scuttled for a more progressive mentor-mentee relationship. As someone who's sponsored and mentored women over the years, I salute! The stuff about eating your feelings and the Cathy-esque spazzola stuff seems forced though, Tina. You're so much more than an everywoman! 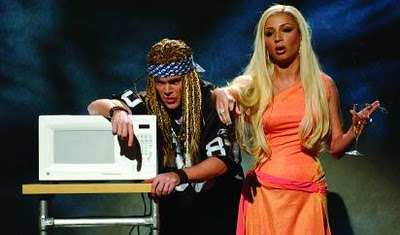 3. Maya Rudolph - SNL 2000-2007:
Perhaps she's just too confident to demand top billing or seek a film career, and that's why her name doesn't strike a chord the way her SNL top-shelf alums like Fey and Amy Poehler do, but Maya is the bomb! Her seven-year spin in early 00's SNL included the Donatella Versace holiday parties, her tragically hilarious rendition of Whitney Houston on her way up, down, and semi-up again, and Vinnie Verdecci's daughter reciting her English class days of the week... and man can she sing! Tru-baller SNL fans ask: When is she going to get her own Best Of? 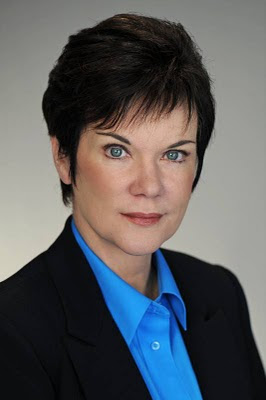 4. Candace DeLong - Deadly Women:
For those of us too squeamish to watch serial killer dudes abduct and torture innocent girls, the Deadly Women show on Investigative Discovery is a godsend, recreating three factual scenarios each episode with actors playing an array of poisoners, shooters, manglers and matricidal maniacs, all of whom are women. It's narrated by a woman with a great if predictable sense of pausing and dramatic enunciation, and presided over by the regal Candace.

I keep waiting for them to do one on Brenda Wiley, my Central NJ champion of incarcerated girls who killed their mom and nosy brother at age 15: who knows if DeLong gets my letters? What's important is that she was the first female FBI criminal profiler and the inspiration for Clarice Starling. And she's still hot! I love the slightly bitchy way she lays out the behavioral underpinnings of the girl killers, saying things like "She needed to buy things to feel better about herself, and if she had to kill someone to pay the bills, that was... fine... with her!" 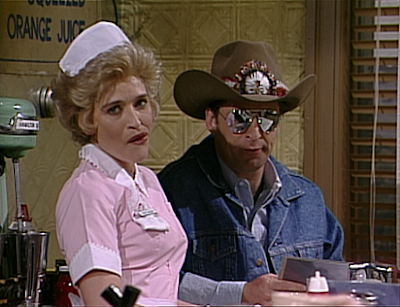 5. Jan Hooks (SNL 1986-1991, recurring guest appearances on 30 Rock)
Now most recognizable as Jenna's greedy meth head nympho-alcoholic stage mom in 30 Rock, who'd have guessed Hooks was once super hot and sultry and a regular on SNL?  I admire how she now acts as if she's been kind of white trash Liz Taylor brazen and busty all her life as said mom, while her foxiness at SNL tells a whole other story.
****

Yeah, I know, some of these chicks is from yay far away in the past, but so what? I really only watched SNL reruns on Netflix streaming (cuz I lives with a comedy writer), and discovered Deadly Women, 30 Rock, marathons of America's Next Top Model, (cuz she likes the trash) and lots of WW2 documentaries (that's my reward for enduring the chick stuff). I'm turning into a vegetable, but that's what 2011 is all about.
Posted by Erich Kuersten at 8:16 AM