Joni Mitchell's "He Comes For Conversation" 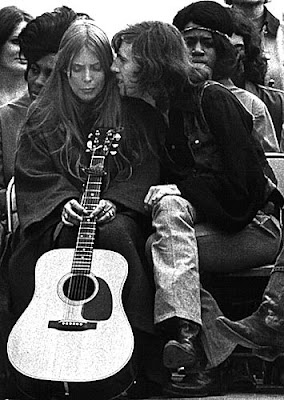 This song, from Ladies of the Canyon (1970) is a song about a love triangle, of which Joni is the unloved part. It discusses "he" who comes to her little Laurel Canyon kitchen to undoubtedly sponge coffee, wine and snacks off her--lady that she is, perhaps tea--while bitching about his girlfriend ("Why can't I leave her?")

He comes for conversation
I comfort him sometimes

Patiently she relates to us, her adoring listeners, what he says about his girlfriend-- the one Joni hopes to replace:

She speaks in sorry sentences
miraculous repentances...
I don't believe her.

Mitchell's delivery of the last line is curt, spoken rather than sung, as if shooting us an eyeroll while he natters on and on. It's a powerful song and Joni is a genius, I tremble to think of it. I used to listen to Ladies of the Canyon and Blue all the time while driving around Seattle, all lonesome and addled and lovestruck for whomever I wasn't dating at the time. I loved a girl named Florabeth (not her real name), she had long blonde hair like Joni, and on a big billboard along my courier route in downtown Seattle there was a Virginia Slims ad with a huge photo of the same girl, the Alice in Wonderland version, but same hair, so was she chasing me or I her? Am I the Mad Hatter like I hope or just a druggy caterpillar? It was never a sex sort of love, but more chivalrous and ancient. The muse is seldom the same as the lover; the muse should always be far away, on the other coast. Flora was back east, still in school. I could let my heart melt in gushing Lancelot-esque tears for my queen back on the other shore with old King Arthur. Ah, the vaniglorious associative-depressive miracle of youth. 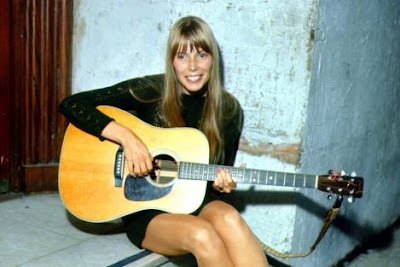 So I would listen to Joni while driving and thinking of Flora, and suddenly the tears would start. "All I really really want or love to do / is to bring out the best in me too," she sings the very first song. "I want to shampoo you / I want to renew you again and again." I wanted her to do that to me, but it was also me wanting to do it to her and the world; she opened me; the sunshine was her shampoo as it flooded through my windshield.

1977, my mom was working in a runaway shelter, and brought home for Xmas weekend one of the runaways, Toots was her name, because "everybody calls me Toots." She was Joni Mitchell in mood and hair, and Venus-like in pristine 16-year old beauty, and denim. Nothing much happened between us. I was only eleven, but It didn't need to. I remember my mom gave her two packs Marlboros wrapped up for Xmas; I remember it took me like five minutes to work up the nerve to ask, voice croaked in fear, "Hey Toots, do you want to do Doodle Art?" Which was my gift from Santa, and it was her gift--and God's--that she deigned to do it with me. I was madly in love, and still see straight blonde hair over denim and I fall apart. I still blush with shame thinking of that croak in my voice when I said "Doodle Art" - the long 'o' like some shameful dermatological secret.

All this came rushing back to me with Joni's witty but genuinely heartfelt declaration of wanting to shampoo me. The tears came flooding out, I almost couldn't believe it. I hadn't cried for years, since I was a child. This was genuine emotional release (In 1990 men still didn't cry - it made one unmanly).. It was a private discovery, reminding me instantly of other sorts of solitary physical releases, if you'll forgive the expression. It got me really high and relaxed, crying did, and I became a junky for it. Now I know it's called "depression!" In my case, alcohol-related, though alcohol also initially cured it. Pills took care of the depression after I quit drinking, and then other pills took care of those pills.

And here we are, then, at: "He Comes for Conversation" and our place as the listener in the little love qudrangle we share with Joni. That's the zinger of course, the conclusion Joni leaves us to make: he comes to her to talk about his abusive girlfriend, completely oblivious to her affection for him, either that or relying on it for an ego prop in his down moments, and that is just what she's doing to us with the song. The confessing to us of her attraction for another implicates us in this schemata. That's fancy talk, but what it means in simple terms is... she's punking us out the way "he" does her - we're the fourth in the roundelay, the bottom rung.

If anyone ever does a rap version of "He Comes for Conversation" I hope they will bear this in mind. Joni never mentions any particular relationship she has with the intended listener of her song; and as we know, even the most private diary is really a letter, but to whom? For me, all my art or writing is always a girl like Joni, my beautiful Other, and yet while it is a letter of longing and needing it is not a case of actually "wanting." When the beloved is alone in the room with you, the love snuffs out, it is only when they are far away that love burns, Virginia Slims billboard-size.

Why can't I leave her?

I realized that, somewhere back there on the road, I had.
Posted by Erich Kuersten at 3:05 PM