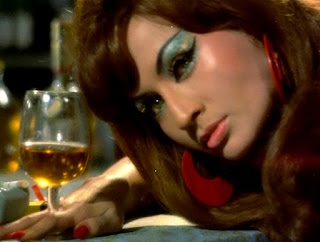 The below video is from CARAVAN (1967) - music of course by R.D. Burman and sung by Asha Bhosle... these guys were an unbeatable team, maybe still are. I'm still so turned off by Hollywood's bourgeois embrace of 'Slumdog Millionare'--their little pat willingness to embrace a new setting and style provided it's filmed by a guy with a name like Danny Boyle instead of V.D. Rakeshyamadevanandi, a name I just made up, but you get my point... I hope. I mainly got into it all back in the days when I was a loungecore DJ (c. 1997-9). But that whole scene ended because a) swing dancing took over and suddenly instead of tuxedos and boas it was tacky black fedoras and suspenders over pressed white shirts, and b) The hub of the loungecore scene was Windows on the World on Wednesdays... which if you don't remember was on the tippy top of Tower A (or was it B?) in the World Trade Center.

And also, I stopped going before then because I could no longer drink.

Note the chillingly nonchalant male-on-female physical abuse that begins the above number. There's some other disturbing moments elsewhere in CARAVAN, like when a gypsy king starts horsewhipping his wife for burning the dinner--though it turns out our heroine in the film is to blame! Once she confesses, the man stops whipping his wife, but doesn't apologize or anything and the matter is forgotten. Icky, but fascinating in its cruel nonchalance.

Much more cosmopolitan is JEWEL THIEF, also from 1967... this song below is very lyrical and lovely and I'm a sucker for studio-set 'outdoor' moonlit ponds.

Posted by Erich Kuersten at 10:44 AM No comments: