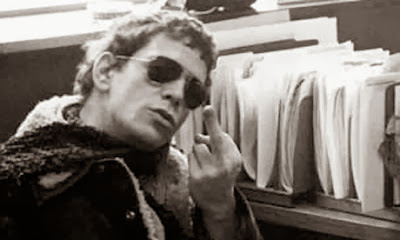 See: The Great American Novel: A Lou Reed Discobiography from House Next Door (11/10/13)

(From Acidemic): When I first started hunting down his canon in local used punk rock record shops as a snotty 17 year-old I didn't even know we had the same birthday (March 2nd), we both wear glasses and we both majored in English Lit and Syracuse University. He supposedly stayed in my same dorm (Flint Hall), and like him I moved off campus soon after and formed a band. It was before the internet, or any bio on him, so one couldn't just know all these things. All I knew is, I had been adrift in a myopic solipsistic tweenage alienation for years, and Lou came along and said, "hey kid, don't settle for walking." He didn't lead me out of the abyss, but he helped me contextualize the pain into a grand artistic persona, a blue mask to reflect the glare of a hostile world back into its own eyes. He wasn't singing about love me do / you know I love you, he was singing about the agonizing pain of coming home from a dark and dirty fun party and instantly feeling paralyzingly lonely. 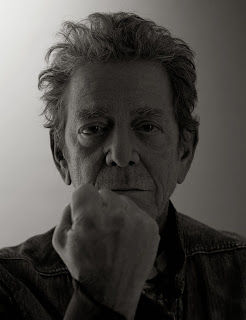 I saw him play, twice, at the Ritz, in '85, at the start of, and end of, his tour supporting Mistrial. Disappointing, since Robert Quine wasn't there, but Fernando Saunders was on fretless bass and I knew then I had to become a bassist. I finally joined a band sophomore year, when I was already on my way to becoming an acid rock hippie freak, but I still sang "Sweet Jane" and "I'm Waiting for My Man" and sometimes "Heroin" during the third set, and I was already making token struggles against my burgeoning alcoholism, again not knowing Lou was a drunk, too, and wrote "The Power of Positive Drinking," the sweetest justification for not getting sober when you know you need to, and then "Underneath the Bottle" an album or so later when he realized hey, sooner or later you're going to have terrible DTs, so why not get out in front of that, too?

In my late 20s living in a midtown loft with my lead guitarist, I would spent hours and hours hyperventilating over the toilet from 2-6 AM, nonstop, trying to keep down enough vodka to stop dry heaving. I was so sick from alcohol poisoning I couldn't hold down the liquor I needed to not suffer the horrors of alcoholic convulsions. I was caught in a vicious circle. My only company were Lou Reed in everything and Nic Cage in LEAVING LAS VEGAS. Sometimes I had a stolen-from-my-girlfriend Librium to help me come down but more often than not I'd drop it and be crawling around for hours in panicked desperation. But Lou had a song for that too: "Waves of fear, squat on the floor looking for some pill, the liquor is gone... " My decision to be so open about all my drug and alcohol use, to be blunt about my divorce, band difficulties, emotional rises and falls, losses and regrets, and ambivalence, the courage to let it all hang the stuff most people hide come out in the open, crafting art (or art criticism) from the medium of my own guts, it all comes from him.

None of that means I knew him personally, but I felt like I did. A lot of us did, it was a personal thing. We didn't even mind he could be a total shit some of the time, to his fans, to his world. He never tried to hide his venom, if he had he wouldn't have been him anymore. "Give me an issue, I'll give you a tissue," Lou snarls on Take No Prisoners. "And you can wipe my ass with it." 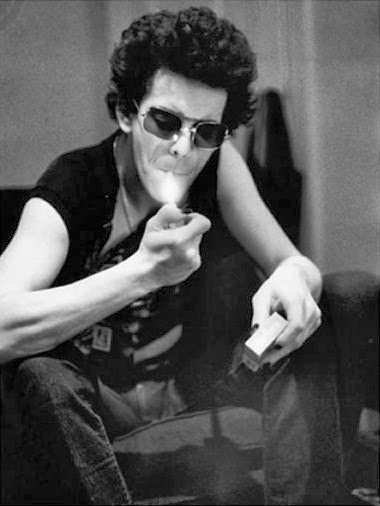 Sometimes, like after I read one of his unauthorized bios, I began to hate him, but I always came back, because he never sold out or got repetitive. Suddenly after a slump or two there was New York, a new classic, and one of my favorites, the Warhol eulogy record with John Cale Songs for Drella -so perfect and simple with Lou's guitar and Cale's viola never sounding clearer or better together, as if Warhol's spirit buried the hatchet and brought out a playful reverence that they never seemed to share before or since.

But he could be a shit. Maybe it was because he let us all feel like we knew him, and that level of broad openness in one's art is always going to have drawbacks, like finding out the most fun and awesome guy you ever dated is a thief and junkie, and so what, are you going to walk out on him? Lou never stole from us, and he gave so so much of himself that a lot of us freaks, who have never felt this way about any other artist before or since, could forgive his insecure lash-outs. He was the cool older brother who brought us to all the dangerous places most young suburban kids never see. He didn't leave us at home with mom, afraid we'd cramp his style. He didn't abandon us. 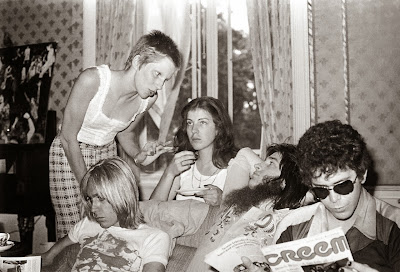 So I'm not going to cry this time. I'm just going to make a spotify mix and take a look back at the 30 odd years I've been a Lou Reed disciple, and realize if I'm anything, or anyone, or have any sense of belonging to the gritty New York streets I haunted for the past 20 years (before moving to goddamned Brooklyn) it's because of Lou. Lou, I swear I'd give the whole thing up for you. And I did. 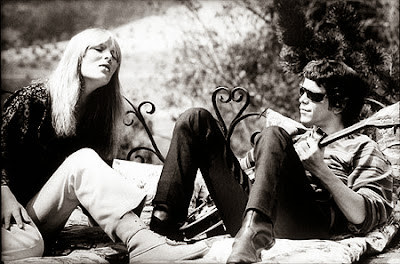 My piece for McSweeny's on "Venus in Furs"

"When Lou sang of the “whiplash girl-child in the dark” who said things like “taste the whip, / now bleed for me,” suddenly I could take the violent reproach of my aching hormones and twist it like a sword until I disemboweled the old me. The result was like dropping nitroglycerin on an oil fire, an alchemical reaction that set me free. I knew that I was, at heart, a sadomasochist." 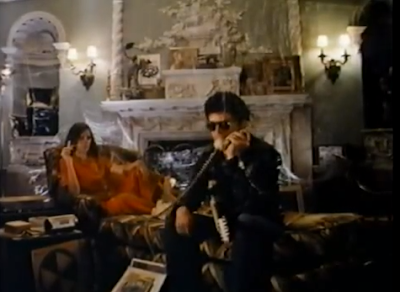 "Death has brought you close to art as we know it today," says Lou, to Max Wolf, ailing manager of the film's equivalent of Bill Graham's Fillmore East. The film starts rough but develops a sweaty-palmed rock intensity that might recall the best rock movies and rock shows and flashbacks of any drug-fueled moments of transcendental pagan abandon, the wild fury of the mosh pit, and onwards.

King Blues sings "Mannish Boy!" Malcolm McDowell plays a T. Rex / Mick Jagger hybrid. There's a great Iggy Pop-ish animal man, a scabby punk rock poetess, a flooded bathroom with a shark swimming around it, a giant hypo, and Daniel Stern pausing to inhale some smoke from a $1 hookah hit-sellin' Rastafarian in one of the stalls... Iggy prompting people to jump off the balcony, including Paul Bartel. There's a Satanic pimp alien coke dealer, magical LSD in the water cooler, a crowd-surfing refrigerator, acid rock hippy freaks, a twitchy fire inspector, and that's just the tip of Malcolm's talking penis. It's the beginning / of a new age.

Here's my Lou Reed Spotify Mix, adjusted to reflect a tribute / eulogy / farewell / ode I think Lou would like. He loved assembling new CDs from his old catalog, and he has a flock of cool Spotify mixes himself, that he made, of other musicians he likes. My Lou Mix has no "Sweet Jane" or "Walk on the Wild Side." Too easy. This is the stuff I loved at the time, me alone, in my room, with headphones, blotting out the parents and the world outside the New York Streets. This is the weird stuff no one else would know, lada lie... RIP Lou Reed. xo

Posted by Erich Kuersten at 9:11 AM No comments: