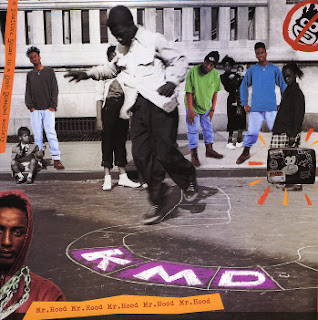 I was scared of 'rap' as a 20-something negotiating my way through the end of the Bush years but my friend Max was insistent I learn Public Enemy, NWA, the Geto Boys.. damn that stuff scared the shit out of me. But there was also cool shit, hip-hop: Young MC, Brand Nubian, De La Soul, and--my favorite--KMD.

While many of the albums linked major tracks with little in-between skits, KMD took it to a meta level with an old 'learn to speak a foreign language' record, the narrator's patient white male voice coming off clueless and arrogant to the KMD brothers, as when the narrator says "your mother likes to visit the old churches," and you hear in the back "oooh, I know he didn't just dis your mama". Hilarious! But best of all, was the feeling that the KMD crew weren't just scaring white kids and preaching local block unity, they were letting the white kids come home and see their bedrooms--finding they all could agree those old stereotypes were history -  as in time to dust off "Little Black Sambo" and see what may be sampled.

Now Little Black Sambo was an album I actually had on 78's as a kid--inherited from god knows what dead relative along with Peter and the Wolf. Both albums took up about 8 double sided, inch thick 78s. Sambo depressed me, even then as a kid in the early 70s, only dimly aware of how godawful racist it was (I think I smashed the discs after ROOTS premiered). I hated it because the were just too many pancakes and tigers, too much eating and running.. it made me nauseous. So hearing the sample brought me back, but Zev Love X wasn't about to come down on me or my white brethren. He brought us along with bemused disbelief, half blaming the accusers of racism as much as the racists "you mean that coon is me?" in the joyously inclusive "Who Me?" While in "Banana Peel Blues" he waxed off about racism like he'd just gotten the textbooks at some Strong Island college class and was seeing what still applied and what didn't. You could imagine him reading passages out loud to his pals in the dorm, half mocking the text. There was something so direct and sweet about it because X refused the us vs. them of so much rhetoric on either side. Rather than try to bury Sambo in the ditches of culture's verboten junkyard--where, as Freud taught us, nothing stays buried for long without an eventual rise up zombie-style from the repressed--he dressed him up in a big parade costume, as below:

(I never actually saw any of their videos, til now, writing this, by the way - 1991 was looong before the internet and MTV was strictly commercial)  Anyway, we loved the album. It sounded great high on acid.

Then, as all good things do, the summer of love ended-- groups like "Reality Used to be a Friend of Mine" and ("G'head Mr. Wendell") took new age tolerance to an almost icky new age level. And in the established acts, humorless rhetoric and druggy aggression took over. Cube left NWA and their follow-up album was just sensationalist parent outrage-courting misogyny. Brand Nubian got sucked in the undertow that followed rap's commercial success in the mid 90s, and thinking man's hip-hop got steamrolled (in the waterless horizontal bong sinse) by blunt acts like Cypress Hill and Dr. Dre.

I could not get into Dre, so rap, hip hop and I parted. I still listen to Brand Nubian and KMD, and Ice Cube, but little else. Years later while on a trip to San Francisco I found KMD's abandoned sophomore album at the famous Amoeba Records. With it's picture of a lynched Sambo on the cover. I didn't know of course that their label had dropped them over the cover, which is a classic example of the way literalism and overbearing PC ninny-itis was clouding issues in the early 90s, and that Zev's brother Sub Roc had died around the same time in a car crash, and KMD was history... and X had disappeared without a blip on my radar.

That's why another ten years later, discovering MF Doom was such a thrill, a veritable Phantom of the Opera unmasking, with a new identity, or lack thereof. Zev Love X had returned, once again quietly and under my radar, I recognized his voice in an MF Doom track playing at the old Kim's Video. It's done my OG heart a good turn to see him still out there, blazing his own unique trail, proving that straightforward examination of stereotypes causes them to melt away in the sun.

I only hope I have the balls to wear the mask one day if I should fall from grace, and thence seek to return anew, reborn, and if you need help taking down that fucking arrogant dickhead Johnny the Human Torch, let me know. And if you want to switch up, switch up!!
Posted by Erich Kuersten at 10:23 AM No comments: