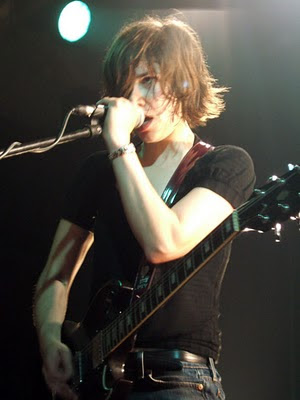 I saw the first five episodes in this hilarious IFC series before putting two and two together and realizing this is the Carrie Brownstein, from that awesome post-grunge Olympia yodeling band, Sleater-Kinney. It was the biggest Sleater-Kinney moment I'd had since a 1997 road trip, passing the Sleater-Kinney highway sign driving through Washington State and going 'Hey!'  That's twice Sleater-Kinney's caught me nappin'.

Brownstein herself is a two/two pinnacle: as ballsy and swaggering as any man (look at her primal stare above) and yet hot and sweet when she wants. Brownstein is some kind of amazing non-diva talent that she can match Fred Armisen scene for scene and bring all sorts of minute, letter-perfect comedic inflection in an array of hilariously skewed characters, then go kick ass as a guitarist and singer for one of the best all-girl rock bands in the history of the Pacific Northwest: "Oh - you've got the dark / est eyeyeyeeyeyeyeyeyeys..."


Speaking of darkness. When the psychic who won said she represented the light and Barrett was 'evil', or used 'dark energy', I smelt a rat. A truly 'light' person isn't going to rain on the parade of darkness, because to rain is to become darkness. Dig? Jackie is an expert crime scene analyst, a serial killer profiler, and if you don't have a good balance of light/dark  that stuff can kill your soul. You can tell Jackie is made for the job because she doesn't prioritize one polarity over the other, and that is the path of the truly enlightened who see 'death is great as life' (to quote Walt Whitman). When Jackie circles a subject, feeling their aura and telling them "you know who I am? They call me the white serpent," you get a chill in your soul but also a sense of relief, she's using spookiness as a tool, not a crutch. She's balanced - she knows when you repress the darkness you give it strength, so she lets the illusion go. Seek not to destroy darkness altogether lest you become darkness, this I say to you. And Heaven only knows the amount of pain and misery she's prevented in her work. In staying true to her quirky self, and using dark power to combat darkness, Jackie is a true agent of karma, and a living example that psychics--the real ones--are true treasures to be revered. Read her awesome web page here. 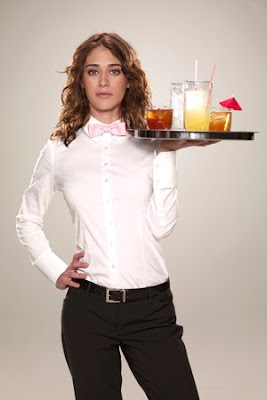 Lizzy Caplan
Party Down
I'm always wary of the perennially single cute smart girl in the ensemble sitcom, as they're clearly meant for male audience members like myself to crush over, without having to factor in some boyfriend to be jealous over, or kids and domestic life to bore us to death, but I'm also highly responsive to that approach.  Lizzy Caplan is a great example - cute, fun, a genius comedienne, and adorable beyond description. Here's what she said about landing the gig on this STARS comedy (avail. on Netflix streaming):


It was starting like three days after I found out about it and I just gunned for it, because it's ten episodes and it's hilarious people with a whole lot of freedom. You're definitely not pandering for huge ratings or anything, so it's the sweetest kind of gig.

Sweetest gig, for the sweetest girl! 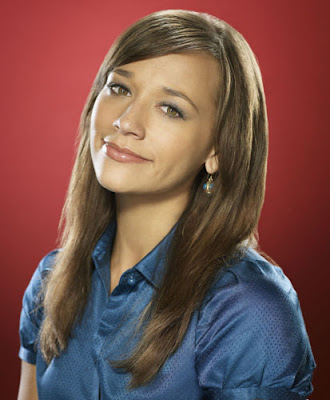 With Amy Poehler embracing her post-baby weight gain and dolling herself up in unflattering knits, it's up to Rashida Jones to carry the hotness weight on the sporadically amusing Parks and Recreation. The problems with the show seem to hinge around its attempt to be 'nice' -- and those of us who know comedy know niceness has no place in it (see Jackie Barrett, above). We look to comedy to channel our aggression - the comedian acts out and says the things we want to say and does the things we want to do, but wouldn't dare, and we're purged. It's like when you're really upset and pissed off and you meet someone who is acting even more pissed than you feel and suddenly you're calm and telling them to relax. Ever notice that happen? Comedy is like that, but Parks is not like that because it misunderstands and tries to be nice in itself, leaving you to deal with your accumulated venom some other way.

Rashida Jones is awesome though, dusky beauty with a sexy voice and impeccable pedigree (Quincy Jones is her father, Peggy Lipton [Twin Peaks] her mom). With all that star wattage you'd think she wouldn't be as grounded and intelligent as she is, but she makes a great gal pal for Amy and brings a smudgy, accessible hotness to the show that no one, including her roster of handsome but bland boyfriends, can match. 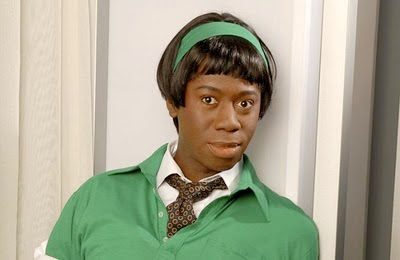 While not a woman per se, Ms. Jay certainly qualifies as a queen of wit, sharpness and knowledge - his/her eye for fashion and proper model runway walking makes him/her a permanent panel member on America's Next Top Model. Nothing makes me fall on the floor laughing more than when s/he gets his/her voice all deep and breathy to discuss girls who look to 'dragalicious.' Next to Tyra, Miss J. makes the show the awesome paragon of simulacra self-reflexivity it is. Go Miss J.!
Posted by Erich Kuersten at 8:55 AM