"Into Dust" - The Gears of War 3 commercial 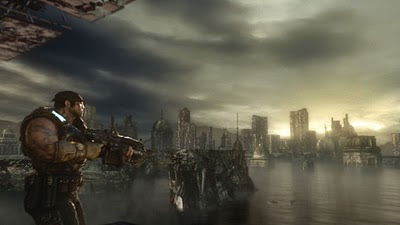 There's an ingenious TV commercial for some video game coming out Sept. 20 called GEARS OF WAR 3. It uses one of my favorite songs, "Into Dust" by Mazzy Star and the juxtaposition of this magnificently still and existentially melancholy song with these apocalyptic visions of war and sci fi machinery is so beyond the usual for this sort of thing that it becomes art. It's not a video game commercial anymore, it's a quick, devastating reading of America's post-apocalyptic pulse. Acidemic salutes the advertising team of Twofifteen McCann!

There's a vibe in the "Brothers to the End" tag line which makes us see that this dismal cityscape, with all the black rainy clouds and robot monsters, isn't going to rise again, not for a hundred million years, and the hopeful little blue lights on the backpack straps of the warriors backing up on their hillside defense position, are going to go out, very soon. It's an Altamont moment, the Stones carrying on under their little stage lights as the best ideas of humanity are crushed under the heel of bad drugs and idolatry right before their eyes. And there's no more fallback position, no backstage safe area, no green room, no supply depot. Just brothers. Street-fighting men. I have no idea what kind of backstory to past Gears of War commercials or game plots this may allude to. I'm just reading the commercial as it's own thing. On that level, it's just a shout away from devastating. 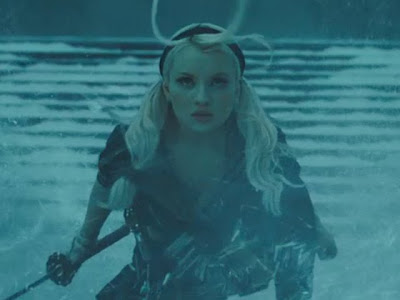 I always thought that Mazzy Star would have saved Zack Snyder's SUCKER PUNCH from sucking as bad as it did, and it turned out I was right. There needed to be a counterpoint to the soulless CGI mayhem of PUNCH's 'fantasy' scenes, which instead were all set to obvious strip club remixes of hits like "Sweet Dreams" and Bjork's "Army of Me." There's more mood and emotion in this damned Gears of War 3 commercial than in Snyder's last two films (by which I mean PUNCH and WATCHMEN) combined. The last time a song worked this well in a violent montage was "When The Man Comes Around" in the credit sequence of 2004's DAWN OF THE DEAD remake, directed by who else? Zack Snyder. When's that man going to come around, again, Mama? 15 months and counting...
Posted by Erich Kuersten at 2:53 PM