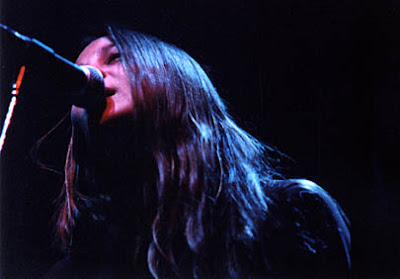 Bardo Pond is the best and only ones who do what they do - which is create panic attack at the club music... the drugs kick in and everything gets slow and weird and you're surrounded by freakily beautiful loving people, but the guitar, slowed to an alien crawl by your push into timelessness--slowness, blanking - wha? Isobel Sollenberger wails in a soft soaring high/low voice as the guitars of the Gibbons brothers cut in and out of tempo the way a brain stuttering its dehydration S.O.S. might cut in out of your aural perception. Our hearing supplies illusions of coherence the way the eye fills in blind spots and the memory remembers what it wants and buries the rest under thick layers of carpet and yet can still hear the hideous beating of its misery. This is music for when you're infatuated with someone you only recently found out likes you too, and just waiting to see each other again becomes like a druggy sickness. You smoke cigarettes to fill the void the way a kid tosses a rock in the ocean but love makes each wave a surfboard until Bardo Pond reaches up with one jangly hand to pull you off your board like a lifeguard in reverse. Blacking in and out of consciousness downstairs at the dance shouldn't be so easily condemned as a bad thing. In the end they're all just experiences. As Sollenberger puts it in "Sunrise" (off Dilate): "Watching it happen /
watching /
it /
happen"

And then this chunky distorted fuzz guitar so tasty you can feel it in your saliva comes spiraling out of the distance and when Isobel suddenly starts singing-slurring again:

"When words turn / to
breath / and silence reigns /
golden /
and the sky is falling /
... watching it happen." 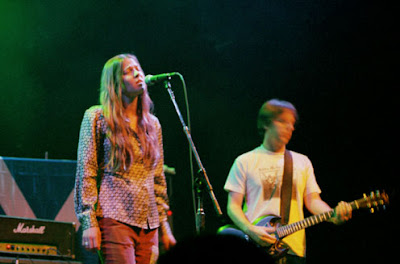 The bass and drums just keep kicking over the same can and almost catching themselves from falling into the basement. It's music to swoon too, and you can, because the rhythm section keeps grabbing your arm and yanking you back up right before your head smacks the concrete club floor, all in one smooth motion.

Rock and roll really IS the devil's music, and its appalling when acts like U2 and Green Day profess to have ties with punk and the devil crowd but then deliver safe anthem nonsense. People like that don't even KNOW what they're missing when they just say no all the time. How could they? People who want drugs illegal have never tried them -- it's just that simple. Anything that kills you makes you cool first.

One more thing: let's talk about peace and Buddhism and shit and who the real posers are now: the new generation of hippie guru carpetbaggers that pass themselves off as the mouthpiece to "your generation" every time you make a collective swing towards the light. 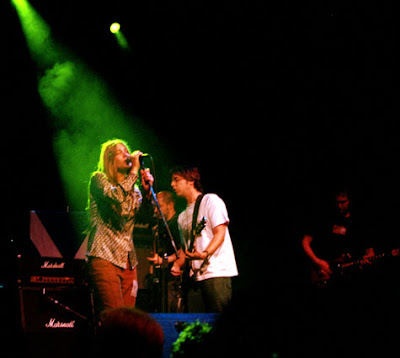 Beware their suspicious, narc-like ingratiation, their brazen attempts to be cool and religious at the same time. Be a leader of yourself and you no longer need to put yourself in a superior position to others. When the object is humility this is even more important, which is why a book title like HARDCORE ZEN smacks of "More Humble than thou" insecurity. A true Buddhist hardcore path would be to make your book as intentionally mauve "Love Affirmations for Mom" or something like that. What about writing something about how to understand and embrace the hobbies of one's unenlightened parents, such as golfing, drinking, going to church, sewing, and television watching? Warner's book should be called "If I'm enlightened, why can't I finally can't let go of wanting to be a badass?" That would be hardcore if for no other reason than all the hardcore kids are afraid to do it.

Even in being "open" there's pitfalls, so don't think I blame Warner or the coming wave of plastic fantastic shamen. Emotional openness and a posture of universal love and acceptance of all things are inherently good, but transcending all opposites and dualities--including teacher and pupil-- is the most fearsome of all. Kids will jump off cliffs or empty out their wallets and wrists just to avoid being loved. Tattoos and piercings and fight clubs are just extreme forms of distraction from the whirling hole of raw forgiveness that is the full you, the one without a second, the one who blows your parent's minds with your raw positive acceptance, who creates room for dialogue so heartfelt it would make Hallmark Cards writers sick in the hallway. Hardcore kids can't even make eye contact half the time, let alone say I love you with eyes moist like a black velvet puppy, or volunteering to take grandma to church, or refraining from sermonizing at dinner how great they feel as a vegan.

Plus, the minute you start noticing other peoples' hearts aren't as open as your own, then you may as well admit yours is closed again. Mine's closed again. Can you tell? My book would be "It's Closed Again, Ma... but I can still dilate... to BArDo PoNd."
Posted by Erich Kuersten at 3:11 PM