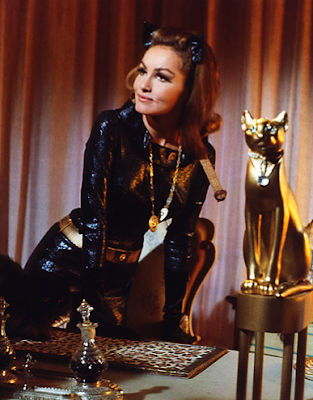 There's been other Cat Women: Michelle Pfeiffer (good); Eartha Kitt (fine), Halle Berry (my review here), but there's only one true Catwoman, only one who rocks the ears, tail, whip, and sparkly black bodysuit as if she was born into it: Julie Newmar.

I grew up watching her in BATMAN after school with friends and then going outside and fighting, dynamic-fake style but fun: "Pow!" "Biff!" And of all the characters, the gorgeous Newmar seemed most able to pull off the hat trick of being super slinky sexy yet kid-friendly; of being a good villain while being mostly harmless and all while having a totally electric effect on my latent sexuality.

Lithe, sensual but never serious... at times her face has a GILDA-era Rita Hayworth quality, where a thin beguiling layer of facial baby fat adding youth and exuberance to her playful cat style, and allowing her every facial gesture to blossom out into a celebration of non-sleazy sexuality. I love--and still do love--the way she get's excited over every aspect of her fabulous crimes, the way she slinks around her lair, her uninhibited come-ons to both Robin and Batman, her handling of her devoted minions; the comfort and delight in her own body; the way she playfully straddles pipes, or twists into weird poses rather than ever lying still... Practically a golden age comic book drawing come to life, Newmar's Catwoman was one in a million. No wonder I grew up fantasizing about my first grade classmates as my slaves in bizarre S/M pre-orgasmic fantasias that kept me up many a night in delirious nightmares of ecstasy! 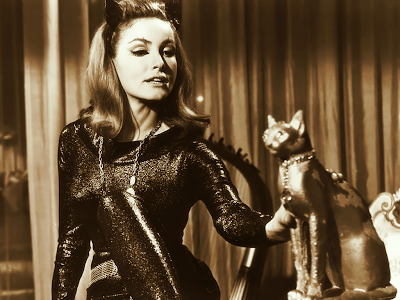 I'd forgotten about the tug she had on my prepubescent hormones until I started watching the show again recently on cable, and enjoying mostly the eps with A-list supervillains (though both Adam West and Burt Ward are better than you remember): Frank Gorshin is a hysteric, cackling, Ed Harris-on-acid delight as the Riddler (Harris would make an awesome Riddler!); Burgess Meredith relishes every cackle as the penguin; Talulah Bankhead is glad to be working as the elderly Black Widow; and coming in a fair second to Catwoman's marvelousness, Ceaser Romero as the Kid show clown-gone-amok Joker.


Like Newmar, Romero finds a way to tap into the deadpan comic hysteria of his character that puts the fractured lack of genuine menace into a bearable perspective. What do I mean? There's an unspoken understanding between Gotham and supervillains: as long as you don't use guns, you'll be out of jail by the show's next season. Jail in "Gotham's liberal prison system" is like jail in a kid's game, merely a place to rest for a two-week stretch or two, so another villain has a chance to torment the city (they go one at a time). Rather than go to jail though, Catwoman likes to apparently die by falling great distances. In one tense two-parter, she ends up almost falling in love with the caped crusader, and he even takes out a batkerchief to shed a tear after she tumbles down a well. I remember being really moved by that at the time. There's definitely a kinship between them, and the dynamic duo's attitude towards her is never as strident it is for other villains. In a way, she's like Robin's illegitimate mother - she's the queen of the night to Batman's Sarastro in the MAGIC FLUTE (on some strange Wagnerian level, Batman and Catwomen are our unholy true parents). She's Irina Derevko in TV's ALIAS. And, like the male villains, she is all inclusive. She whips her underlings, who flinch only out of politeness to the viewer, for were they to writhe in masochistic ecstasy, much disgust would ensue all around (1). She's powerful yet playful, sexual yet beyond sex. Watching her interact with her dimwitted henchmen, you long long to be one of them. 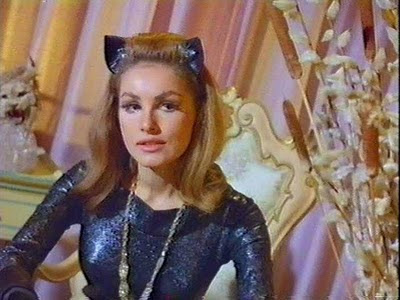 The idea of the underlings in the lair is very meta if you were bad at sports, like me, and liked to be the ringleader for younger kids so you could be the strongest in the various games. The supervillain persona reflects this as one who has deliberately situated themselves outside of the realm of 'the good people of Gotham City,' but at the same time operate a kind of 'home for misfit toys' with plenty of low-rent riff-raff of the "aw, gee, boss" variety (and these underlings are always loyal to the last man). The vibe at the villain's lair or underground hideout is always one of giddy joviality, not so much greed as displays of greed, while the world of Bruce Wayne and his ward, Dick Grayson, is one of affluent sober learning. Dick always has to study the piano or memorize elemental tables, etc., while the aunt looks on, bewildered by any sort of out the ordinary behavior. Is there any doubt where the average 1970s kid would prefer to situate himself? 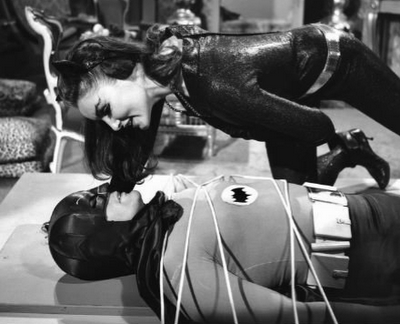 Lastly, a sexy supervillainess makes the Batman mythos operate at a far more evolved level than with male baddies, for instead of an all-boy group of kids pretend fighting in the backyard, there's the female element of the hottie next door who makes all the boys stammer; the yin-yang dichotomy is in place. She becomes the chthonic enemy of normal patriarchal civilization, its inescapable shadow. How easily she gets our dynamic duo in tied-up situations, yet always leaves them room to escape; she likes the chase and the drama and the last minute rescues and, like the other villains, there's a clear idea that without the dynamic duo to wrestle with and subject to various colorful slow torments, a life of crime would be a drab, dull affair--no one to play with, so to speak. And of course she takes the homosexual associations of the boy wonder and Batman's coded relationship and blows it out of the closet through her explosive hotness. Both Batman and Robin kind of have a thing for Catwoman especially when she's played by Julie Newmar. The other catwomen are okay, sure, but it's not the same - it never would be again.

NOTES
1. the masochist thrives by his very unsightliness. Only the dominatrix, the sole witness, sees him and punishes him for being visible, thus she restores order to the universe of viewer perception and unconscious interaction. A lack of psychological acumen is apparent in the whole idea of Robin and all sidekicks for superheroes:  kids don't identify with Robin but rather see him as competition. With his infantilizing green shorts he too is better left unseen, redeemed only by his fiery fearlessness and fabulous fighting flair. Burt Ward--who did all his own stunts and was a karate champ--made Robin cool despite all the best attempt of Bob Kane and company to the contrary.
Posted by Erich Kuersten at 9:32 AM