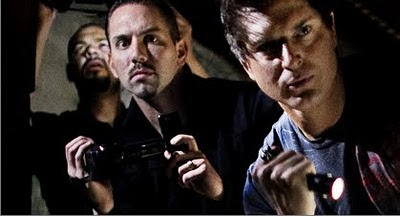 I don't like most investigative ghost teams, but Nick, Aaron and Zak are pretty cool. I can imagine partying with them. I love how they get scared but excited, forgetting instantly they just asked the ghost to make a noise. They're right on the fence of being obnoxious, but it eventually tumbles over into callow vigor and innate showmanship. The funniest guy, the anchor to Zak's boisterous leadership, is Aaron, who deals with the haunted house hunting stress by filming himself with mouth agape and eyes popped open.
These guys are serious bros. "If they want us out, they're going to have throw us over that damned wall," boasts Zak. I believe them. They're not as charismatically-challenged as most ghost hunters and the lame MUFON guys over on Planet Green who think that by somehow separating truth from fiction they'll be any closer to understanding. Aaron knows best! He knows this stuff will never be understood. The whole thing is a dog chasing its own tail, but so what, the tail is ours.

Zak. He's kind of the alpha bimbro, a bit too eager to show off his perfect abs. He leaves in footage of a girl on a school bus telling him he's hot, but feels the need to explain he's taking his shirt off to show his tattoos to the ghosts of intolerant ghost nuns. There's cutaway subliminal images of a guy eating a light bulb, and old weird dolls stop motioning with their eyes. Weird sound effects and liberal interpretations of the AVP ghost whispers, "oooh! I just heard a whisper. . Oh my god! I felt that guys, that was arrrffl!" They're steadfast in their willingness to be scared but their refusal to be scared for long. "Dude that was, like, footsteps!"

Zak gets all indignant "is that what you did? You chained them up to this wall? Are you trying to communicate?" "Did my taunts just anger the spirit of a Spanish soldier?" He's about a third Clyde Beatty, a third Ben Affleck and a third Michael Moore, though he's much more transparent (not literally) it helps him be believable; he's earnest and just a little forced, and that's what TV is all about! Zak actually reminds me of me when I'm filming and bullshitting my way around as a narrator without a script, making it up as I go and barely staying on the right side of the coherence border, feeling I have to belittle my comrades onscreen when I get nervous.

I keep being afraid these guys are going to show up in my apartment and shout taunts at me, and I'd have to scream into their AVP microphones just to get a faint whisper. They'd freak out when I rose from the couch to go refill my beverage.  How else do you ever really know you're dead?
Posted by Erich Kuersten at 10:13 AM