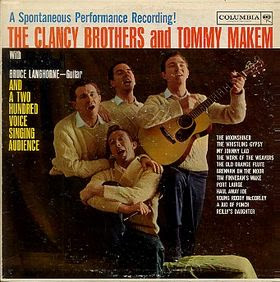 During the folk revival of the early 60s there was no one as cool, as hearty, as manly and drunky as The Clancy Brothers. Their LP, "A spontaneous performance" was in my parents' record collection and it became my favorite album from like age three to seven. I even made up crazy dances in the rec room (or 'gorpenplatz' as my dad called it), "Gorps!" he'd say when I'd show off my skills, including building a gallows out of couch cushions for the song "Roddy McCorley" ("He was excecuted on the Bridge of Toome in County Antermin Ireland. He was hanged. This is his story." The Clancy's appear in Pete Hammil's "A Drinking Life" and I love them though I'm not Irish at all.

This is their story.

Check especially out the last video where one of the Clancys explains Finnegan's Wake.


Abd kastktm here's my favorite Clancy album, mainly because I discovered it as a child (in my parent's collection) and loved its robust courage and hearty playfulness: I would make a gallows scaffold out of couch cushions and mock execute myself in a weird dance I made up, around five or six years old, set to "Roddy McCorley" oh for home video cameras back in that pre-VCR era!

Posted by Erich Kuersten at 4:17 PM